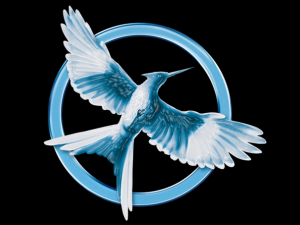 There was a program at the Carroll County Public Library called Hunger Games Mocking Jay and it was for ages 13-17. They started out with an ice breaker game which was that you try to be a peacekeeper and try to shoot the mocking jay symbols to get points. There was also two president snow pictures. If you hit those you get negitive points. They used a nerf gun to do the ice breaker. It was really hard to shoot the targets. A lot of the participants got negative points and 0 points. The highest score was 10 points. The lowest score was -20 points. Then we did a craft which was that you can make a mocking jay symbol and then make it in to a pin. Then we ate a treat which was some pretzels and candy and soda. After we were done,  we played a game which was a flashlight game. Two people have a flashlight and when the lights get turned out,  the music starts,  you have to run fast to get away from the people with the flashlights. When you get hit by the flashlight you have to freeze,  and then someone has to come and untag you so that you can run and hide. We played 3 rounds of the flashlight tag game. The game was fun and intense,  when you did not know where the people with the flashlights were until they are really close to you and you have to run for it as fast as you can. At the end,  everyone was tired but had a smile on their face and were laughing and talking to there friends. It was so much fun wish you were there!