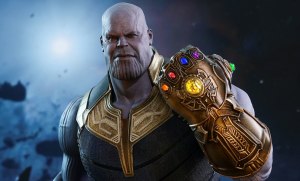 Thanos, the adversary, or antagonist, of the Marvel movies, was born from the planet Titan, which eventually died from overpopulation. Thanos had been exiled and labeled The Mad Titan for his relentless solution to overpopulation: to eradicate half of the population, without prejudice and at random. In the movies Infinity War and Endgame, Thanos goes in search for the six infinity stones, which will allow him to eliminate half of every planets’ population.

Thanos had been exiled from his planet for his idea to depopulate his planet. He believed that his planet was in danger of eventually dying from overpopulation, so he came up with the solution of eliminating half of the population, randomly. After his exile, Thanos believed the universe to be in danger of overpopulation. The intention to “save the universe”, Thanos set out to depopulate planets in the universe, and who ever got in his way, he destroyed. Different emotions, whether hidden or denied, may grow into something unstoppable and psychotic, according to the writings of Vogler. Throughout the movies involving the Titan, Thanos grows rash and intent on not stopping until the “universe is saved”. He won’t let anyone, or anything get in his way. If they do, he kills them. Thanos’s emotion of “saving” turns into an unstoppable force that destroys people and planets, and in the end causes his death.

According to Vogler’s writings on the Shadow of a story, the dramatic function of a Shadow brings out the hero qualities in a hero and it gives a worthy opponent to the hero. Thanos continues to challenge the Avengers; always keeping the heroes on the toes. He continues to bring destruction and struggle to Earth to bring out the Avengers and have them fight him. In the end, Thanos brings his destruction fully upon Earth, eliminating half of the living population. The heroes almost give up fully, allowing Thanos to overtake them, but they get back up and continue to fight against the Shadow that took away their families and friends.

Thanos is a Titan, born to the planet, Titan. With his origin, Thanos has very few similarities between physical Titan qualities and physical human’s qualities. Thanos has the basic human qualities of two legs, two arms, and a face, however, Thanos’s build differs from the average human. The average human man is about five foot eight and a half inches tall, whereas, Thanos is supposedly eight feet tall. Along with his towering frame, Thanos’s broad face and shoulders show an exorbitant amount of strength which allows for the Titan to overpower any force than crosses him. Along with the basic physical qualities of a human, Thanos shares the quality of commitment, determination, leadership, and persistence. To be committed and to have determination is to be devoted to a purpose or a cause. Thanos shows, throughout Infinity War and Endgame, how devoted he is to “saving the universe from destruction”. He shows his devotion through his long search of the infinity stones and his continuous quest to saving the universe. To be a leader, is to guide a group or organization (in this case The Black Order, heinous creatures from the Black Moon). Thanos guides these creatures through the universe on a search for the six infinity stones and the and in depopulating planets. Thanos shows the idea of persistence, the continuous action of a crusade without surrender and without yielding to failure. Thanos continues to destroy and divide planet populations without capitulating or giving in. No matter who or what tries to stop him, Thanos plows through without letting failure get in his way.

According to Vogler, Thanos is the Shadow of the Avengers. The Titan shares a few physical and mental similarities along with the average human; body parts, leadership skills, persistence, determination. Thanos continues to challenge the heroes of the story, the Avengers, and gives them a worthy opponent. During his exile, Thanos’s idea of saving the universe manifested into an emotion that later came to destroy planets and families and kingdoms, and himself.