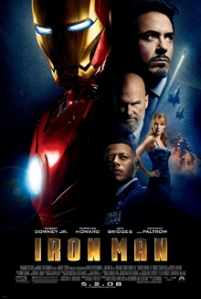 Iron Man is a 2008 film released May 2, that is based off the Marvel Comics superhero of the same name. It is the first installment of the Marvel Cinematic Universe and starts off Marvel’s Phase One.

Billionaire, genius and Stark Industries CEO Howard Stark has his spotlight taken by his son Tony, who amazes the world with his brilliant creations. Years later, Howard dies and his company is taken over by Tony, who is about to present the new “Jericho” missile in Afghanistan.  Stark is attacked and kidnapped by terrorists known as the Ten Rings who order him and Doctor Yinsen to build the Jericho, but instead, they spend days in the cave creating an arc reactor to keep shrapnel from Stark’s heart and armor to escape. During the escape Yinsen is killed, but Stark’s suit charges and he uses it to defeat the Ten Rings.  He crash lands in the middle of the desert during flight without his armor, and is found by his best friend James Rhodes as they return. There, Stark announces no more weapons which disappoints Obadiah Stane.  Stark at home builds a streamlined and newer suit, every day making it more capable of flight. After discovering the Ten Rings are using his weapons and Stane had betrayed him, Stark dons his armor to fight the Ten Rings, who later find parts of Stark’s prototype suit and contact Stane so he could build them an army of iron soldiers to rule Asia but he betrays them by stealing the armor for his own purposes. He reverse-engineers it into his own suit.

Stark decides to find out who sent the Ten Rings the weapons, so he sends his assistant Pepper Potts to hack into Stane’s computer believing he could have been dealing with them, and she finds out Stane had sent the Ten Rings to kill Stark but they reneged. She arrives with S.H.I.E.L.D. to arrest Stane.

Stane’s scientists cannot duplicate the ARC Reactor tech so Stane steals Tony’s and dons his suit to attack SHIELD and goes after Pepper.  However Tony using his original ARC Reactor, saves Pepper and the two warriors battle. Once they get atop the Stark facility, Tony orders Potts to overload the giant arc reactor to electrocute Stane, defeating him. The next day Stark is named “Iron Man” and is advised to keep the identity a secret, but during the conference Tony stutters before revealing himself to be Iron Man anyways.

The Marvel Cinematic Universe is so intricate that it is pleasing to watch.  If you have not yet watched this movie, you should surely do so because you are missing out.